where to start your story

Whether you're just getting started as a writer, or you're a writer starting a new project, you soon learn to expect trouble. You may encounter difficulty knowing how to start your story. You may having trouble putting your best thoughts into words.You also learn to take well-meaning advice with a hefty dose of discretion. I'm not convinced that Ann Patchett or Elizabeth Gilbert would agree with Dean Koontz on this matter:

Nevertheless, I hear this in my critique group again and again: "The writing is good...but the story doesn't really begin until (let's say) page 37," when what they mean is the action or conflict doesn't begin until page 37. But those are two different things. In thrillers, fantasies, and mysteries the story may jump right into the action...but, in literary fiction, the author may first need to set the stage so the conflict that follows has a similar sense of urgency.

For example, in "Talk Before Sleep" by Elizabeth Berg, the story begins with casseroles in the refrigerator and the memory of hanging laundry on the line--pretty tame stuff until we learn that the protagonist is battling end-stage breast cancer. As she plumbs the depths of emotion and friendship, her story becomes as gut-wrenching as if it began like a medical thriller--with the first plunge of the scalpel blade and the blood stained surgical drapes.

In Anne Tyler's "A Spool of Blue Thread," the story starts with an older couple getting ready for bed, the woman removing the hairpins from her topknot while her husband pulls his socks off. Ho-hum. Until the phone rings, and life as they know it changes in a heartbeat.

Emotional engagement is as important in literary fiction as explosive action is in sci-fi and thrillers. The conflict may not unfold right away, but the emotional energy builds just as convincingly whether the action begins on page 1, or page 15, or page 37. Begin with whatever draws the reader in. It might be emotional or psychological narrative, lyrical prose, or world-building. Don't worry yourself silly over the page numbers. 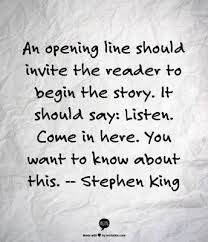 *
No matter how you start your story, you will sometimes have trouble finding the words to express what you know so well.


For my next post, think about how you would describe the color red. Then describe it to a blind person.