how to write the opening line

At a recent conference, Hank Phillippi Ryan addressed the issue of the opening sentence--the line that immediately captures the reader's attention...or loses it.


She told us it should accomplish three things:

The first line should pose a question that compels the reader to keep turning the pages in order to find the answer. Hank writes legal thrillers, but the same is true whatever you write--literary fiction, fantasy, memoir, and even short stories.

The problem is Hank didn't tell us exactly how to write that opening line. This is something you learn by reading, and then practicing forevermore. Pick up a book at the library or bookstore, or check out its first pages on Amazon. You'll get the idea. Either you're motivated to read on...or you're not.

Here are some examples of great first lines:

"In the middle of the night, when I was, above all, Hugh's wife and Dee's mother, one of those unambiguous women with no desire to disturb the universe, I fell in love with a Benedictine monk." from The Mermaid Chair by Sue Monk Kidd. The reader is left to presume that the relationship between the narrator and the monk does somehow disturb the usual course of events and reads on to see how this unlikely relationship is going to work out for them.

"It's so hard to talk when you want to kill yourself.": from It's Kind of a Funny Story by Ned Vizzini, a book written as a novel that was more likely a fictionalized autobiographical sketch, as several years after the book was published, the author committed suicide.

"They say that one of the reasons for tragedy is that you learn from it.": from Range of Motion (literary fiction) by Elizabeth Berg. The reader has to wonder what the tragedy was, and what it taught the narrator.

"My sharpest memory is of a single instant surrounded by dark.": from The Liars' Club (memoir) by Mary Karr. The reader is led to believe that something bad happened and wants to know why it was so important to the author. It was a rape.

"Two days after my father had a massive stroke my mother shot herself in the head.": from The Last Bridge (literary fiction) by Terri Coyne. 'Nuff said...

"The child was just there on the stoop in the dark, hugging herself against the cold, all cried out and nearly sleeping.": from Lila (literary fiction) by Marilynne Robinson. What has happened to this child and what will become of her?

"Bernadette had been dead two weeks when her sisters showed up in Doyle's living room asking for the statue back.": from Run (literary fiction) by Ann Patchett. What is the importance of this statue and why do her sisters want it back now?


"Chet Moran grew up in Logan, Montana, at a time when kids weren't supposed to get polio anymore.": from Travis, B., a short story by Maile Meloy. The opening line suggests that Chet Moran did, in fact, come down with polio. Then what?

The opening line of your book should be memorable, not just a knock at the door, or a phone ringing in the middle of the night, or a storm sweeping in, but why we should care about it. In the first line.

*
"An opening line should invite the reader to begin.
It should say:
Listen.
Come in here.
You want to know about this."
~Stephen King~
*
Summer is winding down albeit with an oppressive heat wave. Nevertheless, signs of autumn are nudging her out. 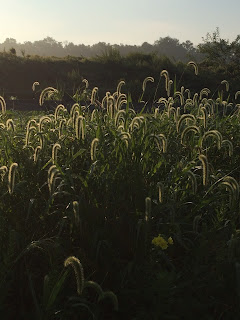 Enjoy it while it lasts.
jan