stories that are hard to imagine and impossible to tell

Here is what my father told me about his experience in WWII:

He never spoke of it. Everything I know about that chapter in his life I learned in disconnected sound bites from my mother over the years. My father's story, in his own words, is lost to me forever. Still, imagining the details would make for an epic historical novel:

"At his family's insistence, but against his will, a bright, handsome young man from America travels to Austria to begin his studies for the Catholic priesthood. WWII erupts. The Nazi invasion of Austria forces him back to the states where he enlists in the army. Soon he meets and marries the love of his life. Not three months later he is deployed to England where he rises to the rank of captain in the Army Signal Corps. His unit is assigned to decode top secret messages that have been intercepted from enemy spies. Although spared active combat, he is among the first American soldiers to enter the concentration camps on Liberation Day. He returns a different man." 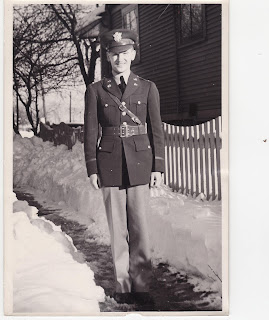 The horror of the camps silenced my father. He had no words for what he witnessed there.


This is not uncommon among traumatized individuals--soldiers, survivors of natural disasters, victims of violence, etc. Their stories are painful to relive, difficult to share, and impossible to imagine--which is what the rest of us are pretty much left to do. Their silence is a tribute to the unspeakable reality they survived, and to the inner battle they continue to wage in its wake.

I wish I knew my father's story. I wish I knew what persuaded him to pursue the Catholic priesthood, and then caused him to turn away from his faith. How it felt to fall in love and then to be swept away into war. What fear, despair and loathing he must have felt, and how it changed him. How he kept his silence about it.

He didn't behave like a tormented soul, nor was he angry or violent. He was a gentle, kind, hard-working man who had a special fondness for nature. He never let his emotional or psychological scars show. He never told us his story.

Memorial Day is as emotional a day for me as it is for many, especially those who continue to grieve the loss of a loved one, or those who still suffer the after effects of combat. For me it remains an empty chapter that begs to be written but can't be imagined.

Whether you observe this weekend at the beach, a barbecue, or a ball game, take a moment to salute the courage and heroism shown by the men and women who protect and defend our freedom. Reflect for a moment on the silence they keep, and what it means.

Remember this: Whether you know the story or not, everyone you meet is fighting a battle of some kind. War rages all around us whether we know it or not. Memorial Day is for all of us.