In case you missed it because you were so caught up with Halloween,

or so focused on the news last week, or so entranced by the fall foliage...

...I am here to remind you that NanNoWriMo officially launched on November 1st. 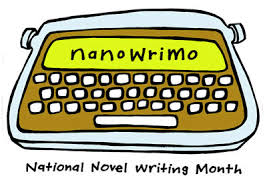 ﻿
We are now three days into it and theoretically should have a good three thousand words down already.

I'm doing OK. Pant, pant, pant. Doing OK. I have a stockpile of K-cups and a big bar of dark chocolate to get me going, and a couple of bottles of good red wine for consolation at the end of the day.

So...the title is "Touchpoints," and here is the opening:

Ray Bolton turned onto Andover Street and glanced into the rearview mirror. To his relief, the street was empty and the sidewalk deserted. He pulled up to the curb across the street and a half block down from the house, and settled into his seat to wait. Moments later his wife, Lynne, stepped out onto the front porch. She locked the door, climbed into her car, and backed out of the driveway.
He glanced at his watch. Seven o’clock, right on schedule. He knew her Tuesday evening routine like he knew the curve of her neck. He’d been watching her for weeks. At 6:45 the babysitter arrived. At 7:00 she left, and she wouldn’t get back until after 9:30. Plenty of time.
As soon as she was out of sight, he turned on the ignition. “It's payback time,” he announced to no one at all.
He pulled into the driveway, and strode up the sidewalk with nothing but a cautionary glance over his shoulder. The fact that there was a warrant out for his arrest didn’t worry him. He’d managed to elude the police for weeks. No one would suspect him here, not in his own neighborhood. It had, after all, been his home for fifteen years. Still, by morning his name would hit the headlines along with a plea for anyone with information to come forward. Had they observed any suspicious activity? A strange car in the neighborhood? Anyone they didn’t recognize? Had they heard anything out of the ordinary? Any kind of a struggle? He didn't expect to attract that kind of attention.
He rang the doorbell and shifted uneasily as he waited for Katie Witmer to answer. She babysat every Tuesday night. He knew the routine. Her mother dropped her off, and then she and Lynne headed out to some class—meditation or weaving or something. If they stopped for coffee or drinks on the way home, he’d have a good head start before they knew what hit them.
He tried to remember why he’d married the woman in the first place. Because she was so much younger? So attractive? So clueless? When Abigail Madigan-Bolton came along Lynne had insisted on hyphenating her last name. If marrying Lynne had been a mistake, having a child was his downfall. She had her mother’s glacial eyes and thick blonde hair, her soft skin and easy smile. He liked changing her diapers and bathing her. He took pleasure in bouncing her on his lap a certain way. He missed that now. While Lynne kept house and tended the yard and cooked the meals, he descended into darkness, driven by a demon he couldn’t out run. All because of her.
*
Interested enough to read on? Comments? Suggestions? Remember, the goal in this challenge is to:﻿
Next week, I'll post another snippet. In the meantime, are you aware that you only have 51 shopping days until Christmas (minus 30, for me...)? If you're looking for a great gift for the woman/women in your life, check out "Empower--Women's Stories of Breakthrough, Discovery, and Triumph", available on Amazon.com here. And thanks for your support!
jan﻿
﻿