This month, while many of my friends are hard at work hammering out the first draft of a novel for NaNoWriMo (been there...tried that), I'm taking an online course with Catherine McLean titled "The Short Story--The Quick Course to Success." (www.CatherineEmclean.com.)
This week we considered how to name and when to introduce our story's protagonist. We learned the difference between stereotypes and archetypes, like the difference between Timothy and Igor, and what image the name brings to the reader's imagination. We learned that the first character named should always be the story's protagonist, and the sooner in the story, the better. We looked at names we intuitively like or dislike, and why.

I've taken workshops with Catherine in the past at various Pennwriters conferences. I'd never given any thought to archetypes until she introduced me to the concept a couple of years ago. It made sense to me so I took her advice and began exploring the meaning and origin of names for my characters. Soon I found it time-consuming and cumbersome so little by little I abandoned the idea. But now, I get it. When a character's name intuitively resonates with the reader, it can be a strong reinforcing element given the character's role in the story. Likewise, it can be an obstacle to the reader if the name resonates negatively...if it doesn't suit the character or if it's hard to pronounce.

Check out Catherine's wonderful web site www.WritersCheatSheets.com for much, much more. 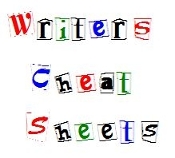 This week we move on to plotting--The Story Problem. Then I have just two weeks to revise and submit the story I've been hoping to get published for several years. Hopefully, this will be a quick course to success for me!
*
"The reality is this--
the muse doesn't exist.
What exists is your IMAGINATION."
~Catherine McLean~~
*
I'm going to finish with a pitch for a really great book. If you need one more kick in the pants before you start your novel, or pick up your paints, or give voice to your song, run out right this very minute and pick up "Big Magic--Creative Living Beyond Fear" by Elizabeth Gilbert, author of "Eat, Pray, Love." Be prepared to take notes.