If you know me personally, or follow me on social media, or read this blog, you know that we welcomed our first grandchild into the world this year. Caleb is six months old now, already past the gentle rocking stage, the quiet observing phase, the happy-just-to-be-cuddled time of his infancy. Now he's sitting, crawling like a little speed demon, and pulling himself up to standing. You can just see him plotting his first walk. 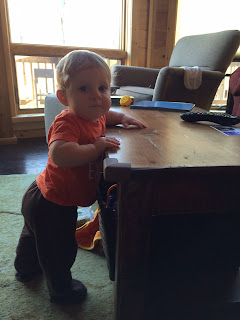 Of course, none of this came easily to him. It's like he got an idea in his mind, but when he tried to pull it off, something went wrong. He knew he wanted to sit up by himself, but for a long time, whenever he tried, he would simply topple over. Rather than let it discourage him, though, he would begin again. And again and again. Then, just when most of us would have given up altogether--BINGO! Success! Victory was his!


Suddenly, it seemed as though everything changed in a heartbeat. He wasn't sitting up by himself in the morning, but by afternoon, he had it down. He couldn't pull himself up to standing when he went to bed, but he mastered it before before lunchtime the next day. It took many heroic attempts before he was standing next to the coffee table reaching for things he shouldn't have.

He gets an idea in his head and he works at it until he figures out how to do it. He practices tirelessly, getting closer and closer with every attempt until he gets it. He'll do this when he takes his first wobbly steps...when he gets his first bicycle...when he writes his first novel...

...which is how all of us should approach writing.

We get an idea for a story in our heads. We start writing but it isn't very good. The first draft never is, we're told. So, we begin again. And again and again. Suddenly, what for so long has been so difficult for us falls into place on the page. Hallelujah! Success!

...until the next project challenges us to begin again.

Remember the joy of victory: 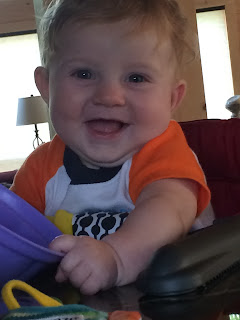 *
"Proceed as if success
is inevitable."
~unknown~
*
jan