This week I’ll be in Pittsburgh taking care of my daughter's Great Dane, the one-and-only Zara.
.


And, earlier this summer, I kept my other daughter's dog, Cooper.

Even so, I miss my dog, Famke…

It leads me to reminisce about all the dogs in my life and their stories. That’s why this week’s post is off topic for a writing blog. Except for the dog story part.
As a child, our first dog was a curly haired, black cocker spaniel named Fluffy. I don’t recall how we came to adopt her but I’m pretty sure we didn’t pay good money for her. Back in those days you did someone a favor when you took an unwanted dog off their hands. Fluffy was sixteen years old and losing her sight when she died. I was sixteen, too. My parents and brother were away for the week on a college tour so I was alone when someone hit her right in front of the house. I called my best friend…whose father was a hunter…because I knew what had to be done. He arrived within minutes, took aim, and pulled the trigger. He was kind enough to take old Fluff away, while I broke the news to my family by phone. It's as though it happened yesterday…

Then there was the gorgeous Irish Setter I picked out at the SPCA and named Penny. She was the intrepid wanderer. We would find her miles from home after getting a phone call from a total stranger in town, or after a random search of the area. So, it came as no surprise when she met the same fate as Fluffy on the highway leading out of town. The same exact fate.

Skippy was a happy mutt that wandered into the yard one day and just decided to stay…after I slipped him a bowl of good cold water and a bite to eat.

Then one day, he just moseyed off and we never saw him again.

Elsie was the orphaned Bassett hound my father brought home from the local bowling alley one cold January night…out of the goodness of his heart. Who doesn’t love a Bassett? But, alas, a week or so later, the owner showed up and back she went.

Then I grew up and got married. And got another dog, a Springer Spaniel we named Paco. As he grew older, he lost his sight to the point where he would just randomly walk into trees in the yard. We did the merciful thing with him in the end. His ashes are on the shelf…

…along with the ashes of Brandy, our first Golden. She lived a long life, too, but her demise was especially painful for us. We were on vacation and she was at her usual kennel for the week when they called to say she was sick—weak and short of breath. They took her to vet for us where the diagnosis was heart failure. A few days later they called back to say she was worse--suffering--and there was nothing more they could do for her. So, my husband asked them to put her down. He was kind enough not to mention it to the rest of us so we could continue to enjoy vacation. All week long he held it in, until we were on our way home.

Next came Macey, another Golden.

In her day she could outrun any tennis ball and snag it out of the air with the accuracy of a stealth missile. She lived to the age of sixteen, eventually crippled with arthritis…just not a happy soul. We had to let her go just a couple of months ago.

And, at some point, we took in Max, our son's black Lab when he ended up in an apartment that didn’t allow pets. How rude!


Like Penny, Max was a wanderer. I spent many hours tracking him down in the fields around our house, and bailed him out of the pound one day when he got caught. He suffered a torn cartilage in his knee that never healed properly so the pain eventually got to him. He had a couple of aggressive episodes that forced him over the proverbial rainbow bridge when he was just five years old.

Last but not least was my Great Dane, Famke. 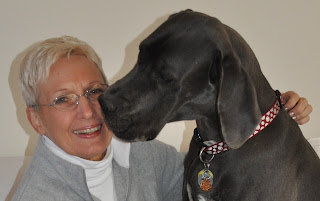 Haunted by the demon of an abusive puppyhood she never got over, she unleashed her pent-up fear and anger on Zara one day. The vet offered testing, medication, and behavioral training in an effort to explain it away, and to prevent it from happening again, but I knew it was too big a risk to take, so Famke followed in Max’s paw prints. After all, we had a grandchild on the way…

A dog is a furry pile of energy and affection. A protector. An entertainer. A listener and a healer. When you invite one into your life, you invite both laughter and heartache. When you lose a dog, you lose a little bit of yourself.

So…thank goodness we have Zara, BK, and Cooper now.