I think I got in over my head when I took on a book about faith. Writing a book about faith, that is. I've been puttering around with it for over a year, grasping every opportunity to avoid working on it, a sure sign something is wrong.

For months I've been telling myself that sooner or later I will be inspired and everything will fall into place for me. Whether I thought that inspiration would come from The Author of Everything Himself (who I blame for coming up with this crazy idea in the first place), or from a magnificent sunrise, or from the dog, I don't know. But I believed it would eventually come to me. Eventually being the operative word.


It's not that I haven't been trying. At a writing conference about six months ago I met with an editor who really got me thinking...


First, she asked me what my book was about.

"Navigating life's darkest moments without giving up on God," I replied in under ten words. Yay!

"What image will your readers come away with when they read your book?" she said.

Image? I met her gaze with a blank stare. I'd never thought about that. I hadn't heard it mentioned in any of the workshops I'd taken or in the books I'd read. She suggested I come up with a theme to use as a framework for my narrative, for the cover of the book, even its title. Let's say gardening, or quilting, or collecting seashells...something people like. Something they'll remember.

I filed her suggestion under "things to think about" even though I had no idea where to begin. I had a 30,000 word rough draft that, even to me, sounded disorganized, repetitive, and decidedly uninspired. It needed some structure.

I've been on the verge of letting this one go for months. Then, this week an idea came to me literally out of nowhere. How does that happen? I have been laboring over this for months, wracking my brain without success, and then--BAM!--it just appears? 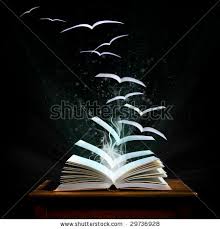 So, this is the thing. I'm writing about people I know who have been through some terrible times--through illness, loss, and grief--but still cling to the image of God as a kind and all-powerful deity. Their faith remains energetic, devout, and contagious despite what they have endured. One of them is the personification of humility, one the image of joy, another the face of forgiveness, and another, of hope. They are the embodiment of the attributes that describe faith. I will probably rename the book, "Ten Faces of Faith" as I sketch out their lives and what we can learn about faith from their experience.

It remains to be seen how this will work out, but I feel as though the inspiration I have been waiting for has arrived, and just in the nick of time.

How long do you give a project before you decide it isn't worth pursuing? How long are you willing to wait for the inspiration you need to move forward with it?

Is your WIP wrapped around an image that the reader can easily visualize and identify with? Are you writing with this in mind?
*
"I may not be there yet,
but I'm closer than I was."
~anonymous~
*
I hope you are staying safe and warm this week. As for me, I am sitting next to a heater with my hands wrapped around a mug of hot coffee. Write on!
jan
Posted by jan at 1:51 PM