j is for jealousy

Have you ever been paralyzed with JEALOUSY? Has envy ever oozed, all gooey and green, out of your pores? Have you ever lusted after another person's success?

Well, I have...and it nearly brought me to ruin.

A couple of years ago a friend of mine pried my clenched fist open and pressed a copy of Elizabeth Berg's book, "Talk Before Sleep", into it.

She insisted that I read it. She begged me to give it a chance. But back then, I didn't read fiction. Ever. Who had time? I read about medicine. I studied it, I lived it, I dreamt it. Still, she assured me that it was a quick read and because I love her, I did it for her. I took it to the beach with me that summer and I read it. 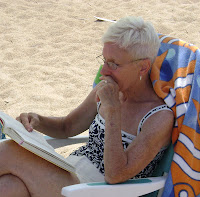 Well, let me tell you...I loved this book so much I wanted to crawl inside of it and stay there forever...while at the same time, I grew to despise this woman, Berg. I was that JEALOUS of her. I couldn't imagine how she did it...how she came to write so beautifully. And because I thought it was impossible for me, I abandonned the pursuit of my own dream of writing out of pure, unadulterated despair...until my muse stepped in, that is.

﻿
Now, you have to know my muse. She possesses a pretty mean oppositional-defiant streak. In fact, she can be an absolute nag. And, I've learned, she's in cahoots with "the boys in the basement", something I never would have expected of her.

So...didn't she put her foot down and start feeding me little snippets of character, scene, and dialogue at the oddest times...when I was walking the dogs, or daydreaming in church, or fetching the mail...serving up tidbits of inspiration like manna in the desert.

As if that weren't enough, the "boys in the basement" got into the act, too.

They started sending up some darn decent plot points. And they kept fanning the ashes until a lone smoldering cinder of desire sent up a shower of sparks that reignited my passion for writing.

So...I guess you could say that the book that nearly extinguished my desire to write was the same book that ultimately inspired me to try.

The lesson I learned is this:

We should never be discouraged by the talent of other writers. The very fact that they found success means that it might just be possible for the rest of us.

*
"Biting my truant pen, beating myself for spite:
"Fool!" said my muse to me, "Look in thy heart, and write."
--Sir Philip Sidney--
*
In my next post, we'll look at a special KNACK some people seem to have.
jan﻿