Next week we're heading south to the beach for a belated summer vacation...even though it feels like we should be heading north to enjoy the fall foliage.

I still have to pack and close up the house for the week so for lack of time, today I'm posting a short piece I wrote. When I get back I hope to be bursting with new ideas and new material. Your comments are most welcome!


I am standing in front of a sooty window in the Intensive Care Unit visitors lounge. The rest of the city was still yawning and stretching when I arrived at the hospital this morning. A few minutes ago I was asked to step away from my father’s bedside while he is suctioned, his catheter is flushed, and his intravenous lines are changed.

Four stories below me is well-kept courtyard. A couple of weeks ago, snow drifts lingered in the corners and around the fountain. Today, the myrtle is in bloom. Sitting on a garden bench, a young couple huddles against the wind while a robin hustles for crumbs at their feet.
I came alone today. My husband said he had chores to do—shutters to repair and shingles to replace—the kind of work he does to clear his head when things get to be just too much. In fact, when I left he was making quite a ruckus in the backyard, hammering and sawing and kicking things around. Needlessly, if you ask me.

Katie, our daughter, offered to come with me today, “In case the doctors require my expertise,” as she put it, grinning. Bravely. Katie is twelve years old, too young to be allowed into the ICU but old enough to understand what is happening there. Her grandfather is dying and the thought of it frightens her so I didn’t bring her along today. She can help her father.

When I turn away from the window it occurs to me that I have memorized every detail of this room, every moment in time. The blue and green tweed carpet and where it’s worn thin, the way the chairs are bolted together in perfect order along one wall, and the building blocks and tattered storybooks that are strewn about in the children’s corner. The dull gray walls and the tacky floral prints that someone hung as an afterthought as if to make it homey--a gracious, if futile, gesture because some of us have been coming here for weeks.

Sitting closest to the door is a woman I know only by her first name, Ellie. She is rocking back and forth, her hands clamped between her knees while she searches the faces of the other visitors here who are waiting for God knows what. Her husband is in with a stroke.

Mr. Petersen is dozing fitfully in the corner on one of those lumpy, green vinyl chairs that appears to sag with the burden of grief he’s carrying. His wife is dying of cancer and nothing more can be done for her.

Nor is there any hope for my father. He’s here because he was a heavy smoker and he smoked for a long, long time. 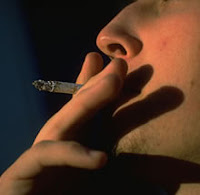 He pilfered his first cigarette in the parking lot behind the post office in town when he was Katie’s age. He puffed his way through high school, through basic training, and through the war. I was born and raised in a cloud of my father’s cigarette smoke. I inhaled it as a child. My hair and clothing smelled like it all the way through high school and college, on graduation day, and on my wedding day. But I didn’t complain about it. I put up with it without a fuss until the day Katie was born.

At three packs per day, it came as no surprise to any of us when Dad’s health began to fail. The sad thing is that we all saw it coming yet we never nagged him about it. So it’s no wonder we were skeptical when he announced his decision to quit, especially since this was long before nicotine replacement products were so much as a glimmer on the pharmaceutical horizon. Nevertheless, without fanfare my father tossed out his last pack of cigarettes and to his credit he never smoked again.

Perhaps it was the coughing and wheezing that convinced him to stop. Maybe it was the aching and tightness in his legs that frightened him. Or, when I told him in my meanest-mother-on-Earth voice that I would not allow him to smoke anywhere near Katie and that just exposing the baby to the smell of tobacco on his clothing, in his hair, and on his breath worried me, perhaps it was the tone of my voice that finally persuaded him to quit.

As fate would have it, though, my father quit too late. Now he lies under the glaring white lights of the intensive care unit after a failed attempt to restore the circulation to his cold, aching legs. He is surrounded by intravenous lines that run into both arms and into the side of his neck, tubing that leads to the thick, rigid pipe in his throat, and wires and cords that connect him to the pumps and monitors that have already started the countdown to the last futile thrust of his heart. This is how he going to die and I want to be with him when he does. As soon as the nurses are finished I’ll return to his bedside to take up the vigil again.

I feel the weight of someone’s hand on my shoulder. “Mrs. Chandler?” It’s the doctor. “Would you come with me, please?”

I summon what strength I can and follow the doctor down the hallway. He guides me into a small office, one of those rooms where the family gathers when the news is bad. A dark, dreary room that admits not a single beam of sunlight for consolation.

“I’m so sorry, Mrs. Chandler,” he says. “There was nothing we could do.”
My father died a thoroughly modern medical death today. He was surrounded by life support paraphernalia of every description, to no avail. He was attended 24/7 by bright, dedicated doctors and nurses, to no avail. He died in the intensive care unit surrounded by people who were too busy to notice when he took his last breath. If the alarms hadn’t called them to attention, no one would have known. He died unattended while I frittered the moment away, unaware, in the visitors lounge down the hall.

I wanted to be there with him when he drew his last breath. I longed to watch the flashing screens and beeping monitors proclaim his ruin, to see his greedy eyes stare blindly into thin air, to watch his searching fingers turn blue. To see his hungry lips parched and silent. I wanted to watch him die. I needed to know he was gone, to be certain of it, to be rid of him and everything he did to me. And what he did to Katie, too.

And now? Now it’s too late.