D is for Dog

Posting this blog every day would be a lot easier if it weren’t for my dog—who happens to be a Dane. Don’t get me wrong—I love my dog. It’s just that she has no respect my time or my space. I’ll be working away and suddenly I’ll feel a nudge at my elbow…an insistent nudge. And then the weight of her head on my arm…which makes keyboarding downright tricky. And she won’t take, “No!” for an answer. But who am I to argue? She weighs more than I do and oh, my…those eyes! Who can resist? 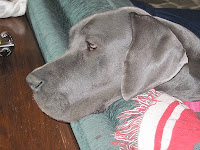 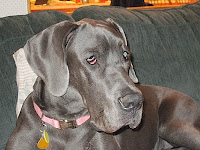 So again and again during the day my train of thought is interrupted and the flow of words comes to a halt while my dog gets her way. I stop to pet her, or to play with her, or to take her for a walk. Except that she tends to wander off so I have to keep her on a leash even though we live in the country. Otherwise there’s no telling where she’ll end up…and I’d hate to lose her.


Famke came to me at the age of seven months…the first six of which she’d spent with an abusive owner. We’re trying to make up for lost puppyhood, but you can still tell. She cowers if you reach out to touch her too quickly. And she has a little oppositional defiant streak in her which is unusual in Danes.


Nevertheless, I cannot resist the mesmerizing rhythm of her wagging tail. I can’t fathom the yearning in those deep gray eyes. I can’t overstate the healing power of warm dog breath.


“Dogs have a way of finding the people who need them,
then filling an emptiness we don’t even know we have.”
--unknown--
jan﻿
Posted by jan at 9:20 AM