In my last post it occurred to me that I should mention some of the other pieces I have been working on while The Bandaged Place makes its rounds among the literary agents I have queried. Twenty-eight letters with nine rejections so far. Needless to say I have been editing my query letter daily in an attempt to attract someone’s attention…and favor. Patience, perseverance, and starry-eyed optimism are my constant companions. If only they knew someone in the business!


In “If Only I had Known”, I write about an older women, Grace Cooper, who has waited too long to see her busy, young doctor, Jason Britton, about a breast mass. He has just examined her and is about to break the news to her:
“This is going to be hard, Grace,” he said. “It could be cancer, you know? It could be bad.”
She gazed over his right shoulder at the blank gray wall behind him. “Been through worse,” she said.
“Worse?”
The woman didn’t know what she was in for, he thought. First she would need X-rays and then a biopsy. All signs suggested that she was in for mutilating surgery followed by an overdose of radiation. Then poisons would be pumped through her veins until she lost her hair, her pride, her hope. Her life. What could be worse than that?
“We lost our only child when she was ten,” Grace said. “Hit by a car. DUI. She bled to death in my arms, pleading with me to do something, ‘Help me, Mommy.’ Gasping for air. Yes, Jason, I’ve been through worse.”
In a heartbeat, the room was as silent and still as any place on Earth has ever been—the deepest cave, the holiest shrine, the eye of the storm. Dr. Britton folded his hands on the desk in front of him and peered over his gold-rimmed half-specs.
“I’m so sorry, Grace,” he said.
“Nothing could be worse,” she insisted. “So what’s next?”
“You’ll need an X-ray and a biopsy before we know for sure,” he said.
“I presumed as much.”
“But we’ll do everything we can for you.”
“Certainly.”

In “The Pull of Gravity”, which is a memoir of a childhood hospitalization, I recall a bout of rheumatic fever:
So, on a cold, blustery day in March I was bundled off to the hospital and surrendered into the arms of an unsmiling stranger—a woman with eyes of ice, hands of stone, and a hole instead of a heart.
And even though I never saw him there, a few days later I learned that my brother had also taken ill and that he was somewhere in the same hospital with the same symptoms at the same time—down the hall or around the corner, perhaps. Because I had no reason to believe otherwise I assumed that everything was the same for him—that he was bedridden in a grim ward like mine where unrelenting monotony was interrupted only by pain or the anticipation of it. Where shadows prowled the halls at night. Where silence was broken only by the mewling and keening of unattended innocents with nothing but the agony of Christ for consolation. (referring to a crucifix hanging over the door that was mentioned earlier in the story)


And finally, in “Life Support”, a woman is keeping vigil at her father’s bedside in the intensive care unit, without hope that he will recover:
Nor is there any hope for my father. He is here because he was a heavy smoker and he smoked for a long, long time. He pilfered his first cigarette in the parking lot behind the post office in town when he was eleven years old. He puffed his way through school, through basic training, and through the war.
I was raised on my father’s cigarette smoke. I inhaled it as a child. My hair and clothing smelled like it all the way through high school and college, on graduation day, and on my wedding day. But I didn’t complain about it. I put up with it without a fuss until the day my son, Alex, was born.
At three packs per day, it came as no surprise to any of us when Dad’s health began to fail. The sad thing is that we all saw it coming and yet we never nagged him about it. So it’s no wonder we were skeptical when he announced his decision to quit, especially since this was long before nicotine replacement products were so much as a glimmer on the pharmaceutical horizon. Nevertheless, without fanfare my father tossed out his last pack of cigarettes and to his credit, he never smoked again.
Perhaps it was the coughing and wheezing that convinced him to stop. Maybe it was the aching and tightness in his legs that frightened him. Or, when I told him in my meanest-mother-on-Earth voice that I would not allow him to smoke anywhere near Alex and that just exposing the baby to the smell of tobacco on his clothing, in his hair and on his breath worried me, perhaps it was the tone of my voice that finally persuaded him to quit.
As fate would have it, though, my father quit too late. Now he lies under the glaring white lights of the intensive care unit after a failed attempt to restore the circulation to his cold, aching legs. He is surrounded by intravenous lines that run into both arms and into both sides of his neck, tubing that leads to the thick, rigid pipe in his throat, and wires and cords that connect him to the pumps and monitors that have already started the countdown to the last futile thrust of his heart.

*
So…this is what I have been doing to keep my mind occupied, having surrendered The Bandaged Place to fate…or luck…or chance. I wish I could say that I have been obsessed with writing…devoted and passionate about it like I was when the novel was unfolding under my fingertips…but I have to admit that, some days, there things I would rather be doing…visiting with friends, meeting with them over lunch, enjoying a concert or a show. So…it’s probably a good thing I’m stuck here at home where I have nothing better to do than to dream up stories… not because I’m snowed in (I wish…) or because the car is in for repairs but because of …yes, you guessed it…my dog—who still can’t be trusted to stay home alone for more than a couple of hours at a time. Which is fine with me because how could anyone resist?? 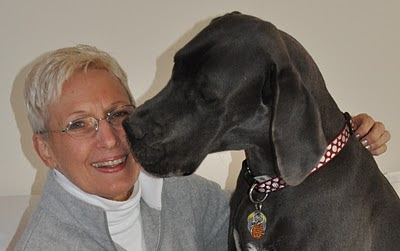 *
Finally snow is in the forecast...another good reason to stay stuck.
What excuse can you find to stay home this week to write, or paint, or compose, or dream?
“In solitude we give passionate attention to our lives,
to our memories, to the details around us.”
--Virginia Woolf--
*
In my next post I’ll tell you how nervous I am about the Writer’s Digest Conference in NYC next week.
jan