I knew that I would be late...again...with this post but I had no idea I would be this late! Oh, all right--I missed last week completely...but I have an excellent excuse and it has to do with adopting an abused puppy.

The news was posted on the breeder's website (http://lighthousedanes.wi.rr.com/). They'd been forced to retrieve two of their puppies from a buyer who had defaulted on his payments but when they got the dogs back, it was obvious that they had been abused. The puppies cringed when anyone reached out to pet them and they cowered at any sudden movement or loud noise. Clearly they needed new homes.

Long story short, five days later my daughter and I were on our way to Wisconsin (a fourteen hour drive from where I live) to adopt Famke, now seven months old. Who could resist? 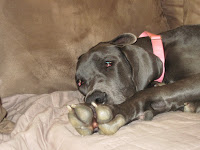 All was well until we got back to my daughter's apartment in Pittsburgh when it became apparent the the poor puppy was sick...so sick! She became weak and lethargic. She wouldn't eat. She would barely move for us. Without access to a vet, we took her to an emergency clinic where she was diagnosed with a bowel obstruction and four hours later a small stuffed toy was surgically removed from her small intestine. Five days later we finally made it home with her where, thankfully, she is recovering beautifully. 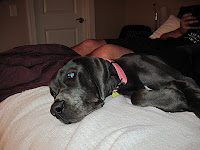 So...if I haven't written and I haven't posted, this is my excuse. I am now the relieved and happy owner of a gorgeous "blue" European Great Dane. I will be forever grateful to AVETS (http://www.avets.com/) for their prompt and expert attention to Famke and to Dr. Alsup who performed her surgery.

Now Famke can "begin again" in a safe and loving home.

"Never underestimate the healing power of warm dog breath."
--from The Bandaged Place--by me
*
I'll try to get back onto the literary wagon when I post next time...barring any additional unforeseen adventures or life-threatening emergencies.
jan
Posted by jan at 2:42 PM